defended his family from the Sleestak, studied the science of the Pylons, deduced the workings of the Land of the Lost

After-Shock
Rick Marshall is one of the main characters in the Land of the Lost. He was played by Spencer Milligan and replaced for one episode by John Kubichan.

Rick Marshall is a tall, solid figure and devoted and protective father. He is compassionate, educated and analytical with training in survival and animal behavior and apparently some knowledge in prehistoric animals. He is mostly seen in his park ranger uniform of matching tan shirt and pants.

Rick was a widower, a park ranger, and the father of Will Marshall and Holly Marshall. He was born and raised in Indianapolis who took his children on a rafting trip on the Colorado River. A massive earthquake happened and the Marshalls got sent to the Land of the Lost through a time doorway. Rick Marshall is the oldest of the group, and is very wise about his decisions. He normally can figure out what to do and how to do it. Rick uses mirror necklaces to communicate when he is away from his children.

Rick often talked with Enik, giving advice and teaching him life lessons. Rick was very curious and liked to know about the things in the Land of the Lost so that he can be prepared to survive there. He experimented with the energy Crystals to see what combinations did, in hopes of one day managing to get back to his own time and space. He and Will would experiment with Pylons and they also make maps of the Land of the Lost.

Eventually, while Rick was tinkering with a pylon to get them home, he managed to open a doorway, but it seems to have been unstable as it accidentally an earthquake within the Land of the Lost. The resulting earthquake knocked over the crystal table just before the doorway pulled him through by himself, effectively leaving Will and Holly alone until Rick's brother, Jack Marshall arrived through the other end of the doorway, reuniting him with Will and Holly. 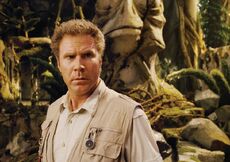 Retrieved from "https://landofthelost.fandom.com/wiki/Rick_Marshall?oldid=7331"
Community content is available under CC-BY-SA unless otherwise noted.