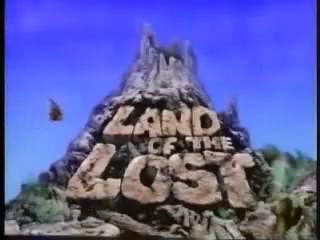 Land of the Lost (1991) was a half-hour Saturday-morning children's series that debuted on ABC in the fall of 1991. The new Land of the Lost series had advanced special effects and a lighter, less survivalist-oriented tone. The series ran for 26 episodes spread over two seasons, with each season consisting of thirteen episodes.

The series featured the Porter family—father Tom Porter, son Kevin Porter and daughter Annie Porter—trapped in a parallel universe after their car fell through a time portal while exploring the back country. They soon meet another human, a beautiful "jungle girl" named Christa who came from 1960s San Francisco. Christa became trapped in the Land of the Lost when she was very young and grew up alone.

The Porters live in a large "treehouse" that the family built after they realized their tents provided little safety from dangerous predators. After their first encounter with Scarface, they devised an alarm system by stringing up a series of empty tin cans surrounding the treehouse perimeter that would shake and make noise if Scarface were to show up again.

Intelligent natives of the Land of the Lost include chimpanzee-like Pakuni and the lizard-like Sleestaks, and there are many species of Dinosaurs. A Paku named Stink and a baby dinosaur named Tasha were befriended by the Porters.

Retrieved from "https://landofthelost.fandom.com/wiki/Land_of_the_Lost_(1991)?oldid=6068"
Community content is available under CC-BY-SA unless otherwise noted.