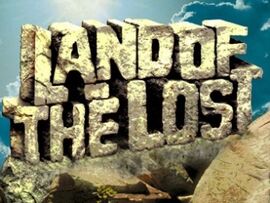 Land of the Lost (1974–1976) is a television series that follows the adventures of the Marshall family through the Land of the Lost. It was remade in 1991 and was adapted into a film in 2009.

The original Land of the Lost series details the adventures of the Marshall family. Rick Marshall and his children, Will and Holly Marshall, get trapped in an alternate pocket universe after plunging through a dimensional portal while on a family rafting trip. Rick Marshall is replaced later in the series by his brother Jack Marshall. The land is inhabited by Dinosaurs, inquisitive primate-type people called Pakuni, and aggressive Insect/lizard humanoids called Sleestak. The story line focuses on the family's efforts to survive in a hostile environment, unravel the mystery of the land itself, and, most importantly, to find their way back home.

Land of the Lost was notable for its epic-scale concept and was a huge break from the puppet work of Sid and Marty Krofft, such as "H.R. Pufnstuf" and "Lidsville." Science fiction writers such as David Gerrold, D. C. Fontana and others were called in to write episodes. In fact, Gerrold developed much of the series from photographs of various science fiction images in a book given to him by Sid Krofft and Allan Foshko. Linguist Victoria Fromkin developed the special language for the Pakuni from the sounds of West African speech in an attempt to develop a language fans could repeat. Non-human characters were portrayed by actors in latex rubber suits, or with heavy creature makeup. Dinosaurs in the series were created using a combination of stop motion animation miniatures, rear projection film effects and occasional hand puppets for close-ups of dinosaur heads. The intention of the series was to create a realistic fantasy world, albeit relying heavily on children's acceptance of minor inconsistencies. It was taped in a sound stage at General Service Studios (now Sunset Las Palmas Studios) in Hollywood, the home of such shows as "The Beverly Hillbillies" and "Green Acres." To cut corners, the filmmakers reused sets, recycled film scenes and re-arranged scenes to create the image of a large jungle.

For the third and last season, the sets were demolished and filming was moved to Goldwyn Studios in Culver City. Several changes occurred in the series as a result. New sets were created, new dinosaurs were created and a large emphasis was shifted from the dinosaurs to more Sleestak episodes and guest stars. The biggest change was the absence of Spencer Milligan, who had asked for compensation for the use of his likeness on series merchandise. Instead of bringing him back, he was recast with actor Ron Harper, playing Uncle Jack. In the first episode of the new season, a crew member in a wig stood with his back to the camera wearing a wig to make him look like Milligan.

Despite a success, the series was expensive to produce, and in 1976, with Saturdays focusing on more sports, the series was cancelled to feature room for cheaper programs. Despite its departure, the show has become iconic for its effects and theme song, inspiring a TV reboot in 1991 and a movie version on 2009.

Retrieved from "https://landofthelost.fandom.com/wiki/Land_of_the_Lost_(1974)?oldid=7269"
Community content is available under CC-BY-SA unless otherwise noted.