Land of the Lost Wiki
Register
Don't have an account?
Sign In
Advertisement
in: Characters, Sleestak, Villains,
and 2 more

has studied crystal technology and fifth dimensional physics, saved the lives of many of the Marshall Family

The Musician
"That is illogical..." - Enik

Enik is a major recurring character in the Land of the Lost. He was played by Walker Edmiston.

Enik resembles a Sleestak, but he is more orange/brown in color with a broader mouth and no nose, which may explain why he's not accompanied by the hissing breathing sound that is associated with the Sleestak. He is also significantly shorter than the average Sleestak (about the height of an average human male). Unlike the other Sleestak, he is not at all bothered by light and can even venture into daylight (which might suggest that the Sleestak had devolved a bit after living underground since the collapse of their civilization). Because of the height difference, the Sleestak often refer to him as "The Dwarf," but being more enlightened than they are, this type of disparagement doesn't bother him. Despite this, Sleestak do hold him some regard as far as leadership and guidance are involved, but they still have a tense relationship and do not always respect his advice.

Enik is also fiercely logical and rational (unlike his Sleestak descendants), often seeming to be completely without emotion or empathy. Enik is always seen wearing an orange tunic with a belt, which has some importance in Sleestak culture. He does have claws, but they are small and rather blunt in comparison to those of the Sleestak. Enik has three claws on each hand, unlike the Sleestak of this era, which have only two. This causes Sleestak hands to more closely resemble a crab's pincers in appearance and function. At the point in time Enik comes from, the Sleestak call themselves Altrusians.

Enik is an Altrusian, the intelligent predecessors to the Sleestak that live throughout the Land of the Lost. He was pushed into the Land of the Lost by some unknown force long before the Marshalls. He has constantly been trying to find a way to get back to his time.

Enik is an ancestor of the Sleestak, and he was once determined to return to his time to prevent their converting to a barbarian civilization. However, he has since changed his motives into leading them away from barbarism and back to a more civilized race. He is highly intelligent and can speak English and thus understand the Marshalls with whom he has become an ally, although several times his conclusions are not to the best benefit of the Marshalls. In trying to return home, he has discovered he was responsible for bringing the Marshalls to the Land of the Lost in order to send them home, but in the revised timeline, the Marshalls had many more adventures and even devastated the land with one of the Pylons in trying to get back home. Enik has several times acted as a mediator between the two even if his own motivations conflict with those of the Marshalls. 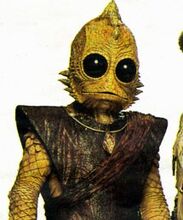 In the film, Enik is changed as well as the other characters; he is the primary antagonist, as he has committed the act of genocide against his people.

Enik was imprisoned for 10 millennia, but escaped their custody. He then murders the Zarn, dictator of the Land of the Lost, and takes control of the Sleestak army. Enik resides in the pylon where he controls the Sleestak with tachyon crystals. He manipulates Rick, Holly, and Will (who were not related in the movie) into finding the tachyon amplifier. Eventually Holly is captured for assisting Enik. Shortly after Rick and Will save her, they learn Enik's true intentions - to lead his Sleestak army across time and space. As Enik's plan nears completion, assistants from Grumpy, Rick, and Enik engage in an anti-climactic battle. The tachyon crystals suffer a glitch, cutting Enik off from Earth forever. Enik is last mentioned to have lost control over the Sleestak as they chase him off and attack him.

Community content is available under CC-BY-SA unless otherwise noted.
Advertisement